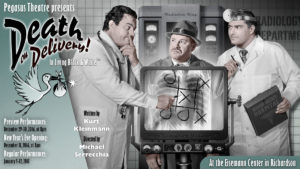 I am the luckiest director in Dallas. Every year at this time I can step out of my normal world of color and into the amazing world of Black and White.

This year is especially thrilling because Kurt has written a new play. “That’s nice” you may say… but you have no idea!

The process of delivery for the new script is the most exciting path of discovery…Instead of giving us the whole play to rehearse at once, Kurt cleverly hands out mere sections at a time, so we are all in a constant state of suspense and suspicion as we rehearse. You see, even we don’t know who is about to meet his untimely end and we have no idea which of us is the killer until those pages arrive.

So as we rehearse and try to guess which of us is the killer, we finally get to experience what you, the audience, have come to expect from the Living Black and White productions year after year.

It truly is a world like no other. Thank you Kurt & Barbara.

“Michael Serrecchia’s direction hones the vaudevillian quality of the exchanges among the three principals, while deftly switching focus on multiple suspects to keep the audience guessing.” Full review here

“Director Michael Serrecchia, back for his sixth Harry whodunit, keeps the highly stylized acting fun to watch, and achieves some cool stage sleight of hand in the comings and goings of suspects and detectives between closet doors, curtained beds, and corridors.” Full review here